Everyone is welcome here (except, of course, those who have borrowed books from me for and have not returned them yet 😉)

This document is meant for people who have never programmed.

It introduces some basic concept of programming, using Scratch , a language designed by the MIT Media Lab to teach kids how to program (http://scratch.mit.edu)

Its main interest is that programs are created using a graphical interface, preventing syntactic errors (thus, you can learn the language without learning grammatical rules)

If you have a good Internet connection, you can run Scratch online from https://scratch.mit.edu/projects/editor/?tip_bar=home

You can have a quick look at the tutorial https://wiki.scratch.mit.edu/wiki/Getting_Started_with_Scratch

In the 'motion' group, take the instruction 'turn 15 degrees' and drag it onto the 'Scripts' panel. 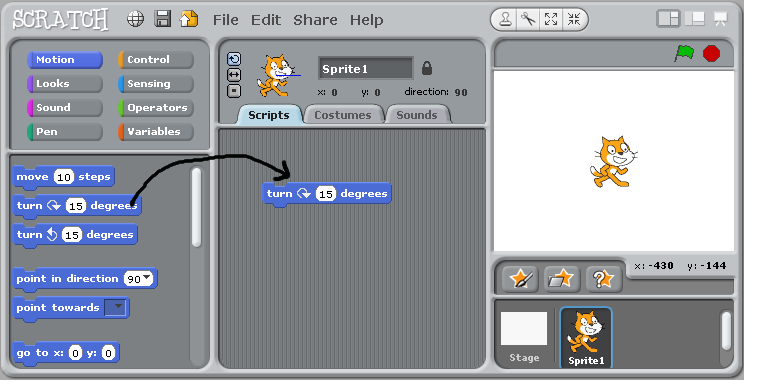 Double-Click repeatedly on the block 'turn 15 degrees', you should see the cat ('sprite 1') rotate.

In Scratch, when one double-clicks an instruction in the 'Scripts' panel, the computer executes it.

You have just created a block of instructions, that is, your first program or script, Bravo!

Click on the 'pen' group, and add 'pen down' at the top of the block.

Construct the following scripts and play with them until you are sure to understand the behavior of the computer.. 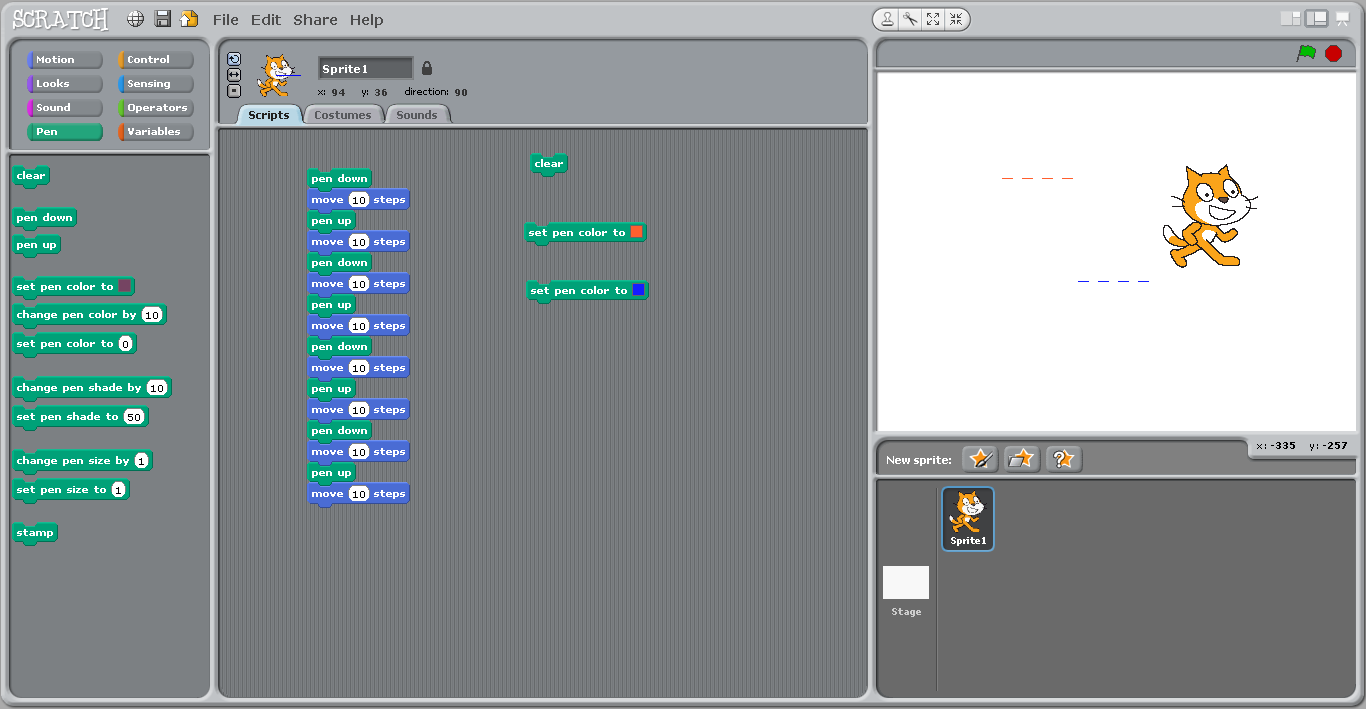 Computers are good at doing tasks repeatedly (as they do not get tired).

Click on the "Control" group, and try to construct the following script: 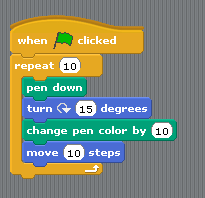 Modify the script as follows: 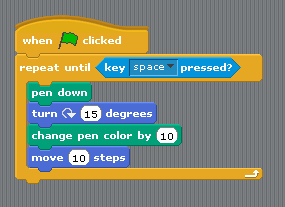 Tip: the condition 'key space pressed?' is in the 'Sensing' group.

This illustrates a repeat...until loop: the inner block is executed until the condition is satisfied.

Add a new sprite, and duplicate the script from sprite1. Click on the green flag. You should see the two sprites running in circles. 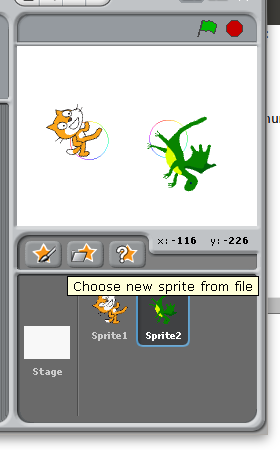 Remark that the scripts associated to the two sprites run in parallel (rather than sequentially).

Create a new scratch project, and change the costume of the sprite into a ball.

Then write and execute the following script. 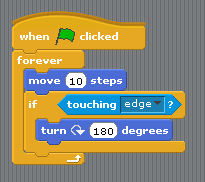 You should see the ball bounce on the edges.

Using the group 'variable', we are going to create a variable 'a' and make it display continuously the x-coordinate of the ball. 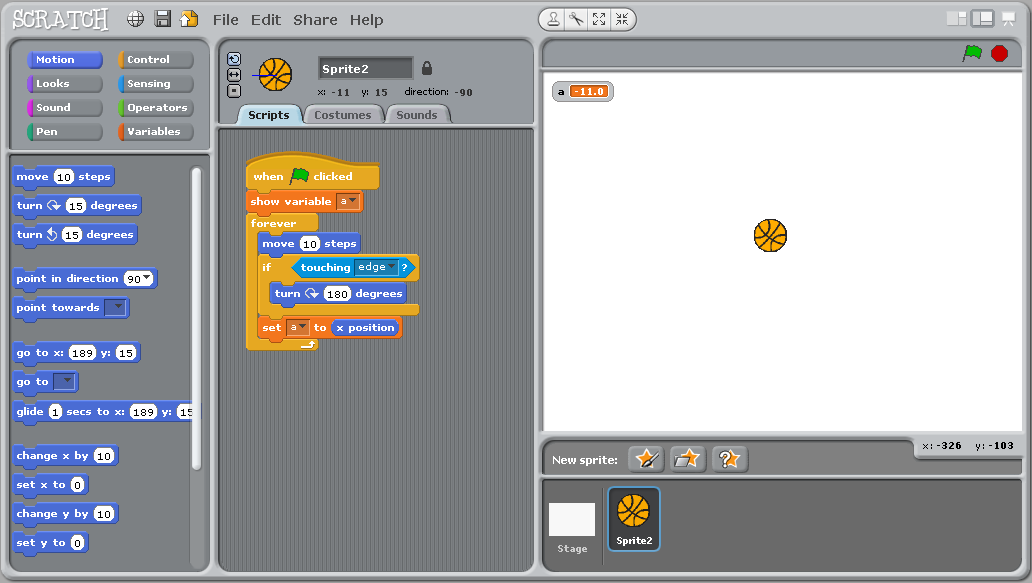 The concept of variable is very important. You can think of it as a name for a object that can change (here the object is a number). 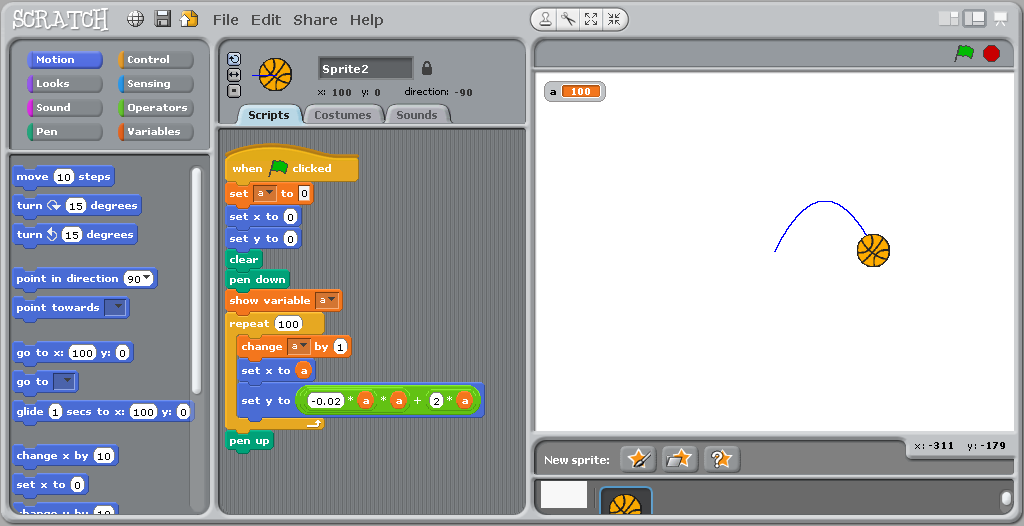 The loop is executed 100 times. Each time, the value of the variable a is incremented by 1, and is used to compute new x and y coordinates where to sprite is instructed to moved to. 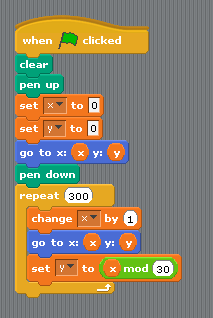 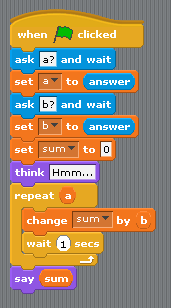 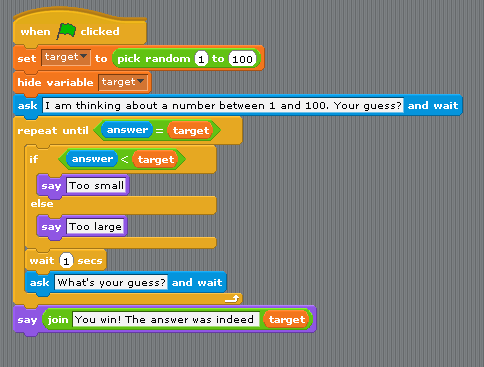 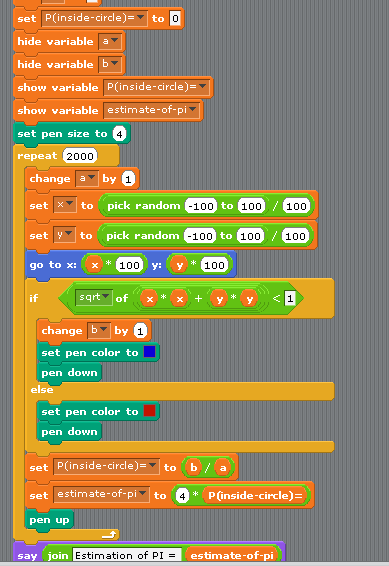 Now, to test your skills in Scratch, you can try to program: